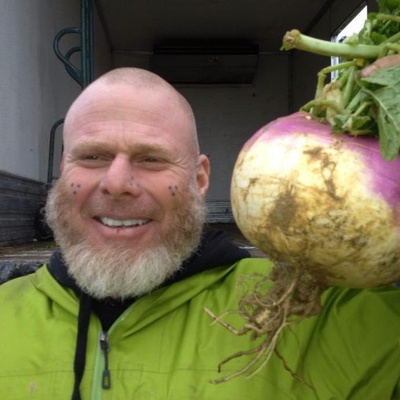 Arthur Morgan’s eyes are wide open. As the downtown Baltimore farmers’ market winds down for the day, he watches as vendors dispose of their unsold produce; the fresh fruit and vegetables ending up at the bottom of trash bins instead of hungry stomachs. Not being one to stand by idly, Arthur identifies the problem, recognizes an opportunity, and acts on it. In so doing, he changes the course of his life as well as thousands of others.

It is in Arthur’s DNA to take action. “If you see a problem … fix it,” he says. And food waste is the mother of all problems. Every year in the United States, 19 billion (yes, billion) pounds of healthy, fresh fruit and vegetables are left to rot, never finding the way to wanting mouths. What happened that day at the farmers’ market ignited a passion in Arthur that has now evolved into the community-wide endeavor, Gather Baltimore.

Gather Baltimore (“Gather” in shorthand) is a volunteer-based program that collects produce donated by local farms, farmers’ markets, and produce distributors. The organization then transports and distributes all the healthy food to financially challenged families in communities where fresh food is not readily available. Farmers no longer have to dispose of leftovers and low-income families gain access to carrots, corn, and a host of other healthy foods. It’s an elegant solution to a daunting problem.

Arthur began Gather from humble beginnings. With only his pick-up truck and a few plastic storage bins for food, he would routinely transport as much as he could carry to a local nonprofit. However, as Gather began to expand, a few bins turned into dozens, and the pick-up truck turned into a full-fledged refrigerated truck.  According to Arthur, “there’s always more that can be done.” In 2012, Arthur received a $60,000 fellowship from the Open Society Institute to continue scaling his efforts.

As an example of how much food we’re talking about, the 2013 Baltimore Running Festival had over 12,000 pounds of bananas, apples, oranges, and other fruit leftover from the race. Thanks to Gather, every last pound was taken to the Oliver Farm Stand in East Baltimore where it was all distributed to very appreciative families. This kind of mobilization involves many people. And Arthur is the first to credit Gather Baltimore’s success to the efforts of volunteers who collect, pack, transport and distribute food to those in need.  Right now, it’s a numbers game. As volunteerism rises, so to does the organization’s capacity to provide healthy produce to low income families. If after reading this interview, you feel moved to volunteer, please visit this link and give Arthur my regards. Thanks for all you do Arthur!

I don’t have any living heroes. I respect a lot of people who work really hard and understand that life is hard. You have to work to get things and make a difference, whether it’s in your family, your community, or in the world.

Funding seems to be the biggest barrier to getting Gather really going full steam ahead. We need operating funds to build and run coolers to store the food we gather. If we had access to refrigeration, we could double the amount of food we save and distribute from 30,000 pounds to 60,000 pounds a week.  We could use funding to hire a volunteer coordinator to help work with the hundreds of volunteers. We have amazing community support and small funders and donors; without them, we could not have gotten this far. We are looking for a way to make Gather a sustainable organization that does not need to rely on grant funding, but rather just some general operating funds to secure salaries and equipment – this would really help us get to the next level.

I am not a writer and could never write a book. But, if I had to come up with a title it would be “The World is Full of Bullshit and Bullshitters.” I’m not trying to be a smart ass. I just see that there are doers and there are “talkers.” You just gotta find the doers to get stuff done!

“What doesn’t kill you makes you stronger.”

Do not listen to the negative. If you see a problem and have an idea to try and fix it, give it a shot. There is always more that can be done.

I wish you had asked to take a tour of the operation. I would have said “yes.” Then I would have shown you the locations where we gather the food and the places we take it. I would have introduced you to all the great people who are working to make Baltimore a better place. Gather Baltimore is not just me, it is the different organizations and groups that we bring food too; it’s the farmers that work hard every day to grow the food; it’s the produce distributors that donate food; it’s the volunteers that show up every Sunday to collect produce at the farmers market; and it’s the hundreds of people that wait in line for hours each week for access to food to feed their loved ones fruits and vegetables.