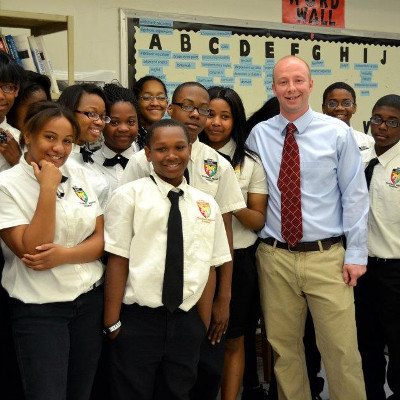 Brad Nornhold is a middle school math teacher in Baltimore City. And apparently, he’s really good at his job. That’s why the City of Baltimore recognized Brad last April with the prestigious “Teacher of the Year” award. Now, he is one of 24 finalists in the running for the State of Maryland’s Teacher of the Year, to be announced in the fall.

I learned of Brad’s story because he teaches at Ujima Village Academy, part of KIPP Baltimore, where I sometimes do volunteer work. KIPP, which stands for the Knowledge is Power Program is a national network of free, open-enrollment, college-preparatory public charter schools with a track record of preparing students in under-served communities for success in college and in life.

Brad was one of the founding teachers when KIPP launched the Ujima Village Academy in the Park Heights area 10 years ago. He told me that he literally went door to door with his staff in the neighborhoods to drum up interest and excitement about the school. Today, the fruit of his efforts are paying off. KIPP Baltimore has one of the highest achievement records in the KIPP network, and locally, it’s helping to build young men and women of character.

Thank you for opening up about yourself Brad in this week’s Talking GOOD interview!

To help ensure that the zip code my students are born into doesn’t determine the education that they will receive.

I would love to teach with some of my former students. To have former students as colleagues would be like passing the torch to the next generation. I can’t imagine better role models for young people in my community than teachers who have been exactly where they have been.

Dr. Bob Moses.  For those of you who might not know, Dr. Moses was a civil rights activist and the founder of the Algebra Project.  The Algebra Project is a foundation that he created to improve minority education in Math.  He started this program in 1982 and I would love to ask him to evaluate the current state of affairs and analyze why the achievement gap still exists and what we can do to close that gap.

Cast Down Your Buckets Where You Are.This title comes from a controversial speech given by Booker T. Washington at the Atlanta Exposition.  I think this quote has a double meaning and I think both of them would be appropriate for a book title.  One, it means to not always be looking for the next bigger and better thing to make positive changes in communities.  The power to change situations and communities lies in what’s already there.  Along with my colleagues and community members, we try to inspire the young people in the Park Heights community in Baltimore to be the change that our community sorely needs.  Second, I like the idea of being a part of the community for the long haul.  My wife and I just bought a house in the area and I plan on being a part of thePark Heights Community for the rest of my life

This is a tough question.  Even though I don’t have a good reason for choosing him, I would pick Russell Crowe.  I’m a big fan of his movies and he resides in Australia which is a place I’ve always wanted to visit.

“Work Hard. Play Hard.” I work incredibly hard.  I work late nights and on weekends.  I am fueled by the fact that I only get to work with a certain group of students for one or two years.  Many of my students come to me well below grade level and lacking certain academic, behavioral, and social skills that will help them be successful in high school, college, and life.  I have only one or two years to get them ready for what lies ahead.  I try hard to communicate to my students in every way that the way to be successful in life is to work hard.  I need to constantly be a model of hard work for my students. But, I also think that it’s extremely important to enjoy life. It’s okay to have fun while you’re working and it’s okay to take time away from work to enjoy life.  I believe it’s this ability to have fun both at work and outside of work that has kept me from burning out as a teacher.  During the summer, I was inspired by the Olympics to create a new sport for my colleagues and me to compete in after school.   It’s called cart luge.  What you do is take an overhead projector cart, run as fast as you can to the starting line, jump on it, and see who can get the farthest down the hallway without running into a locker.  (I currently hold the world record.)  In my opening speech to my students each year, I try to make it very clear that we will work incredibly hard, but we will have a lot of fun throughout the process.

My parents and grandparents. Growing up, I used to idolize the best athletes of the era. But, none of them taught me how to grow up and become a productive part of society or how to treat others with respect. All of that I learned from my parents and grandparents. From them, I learned that it is doesn’t matter if it is inconvenient or hard, you do the right thing no matter what. I hope that I have grown up to be a man that they would all be proud of.

I would love to work for Outward Bound.  I used to work at a backpacking camp (not Outward Bound) in the summers and I absolutely loved it.  My job was to take young people on three to four day hikes.  We would use those hikes to build character, teamwork, and an appreciation for nature.  I love being outside and I love the idea of building leadership qualities through outdoor experiences.

On the way to school in the sixth grade, my yellow school bus flipped off the side of the road. I spent some time in the hospital and since then, I’ve been deaf in my right ear. It’s never been a big deal, except that I have no sense of where sounds are coming from and I can’t hear in crowded places.

QUESTION: Do you have any children? ANSWER: No, but my wife and I are expecting our first child in December. As you may be able to tell, I’m pretty excited!