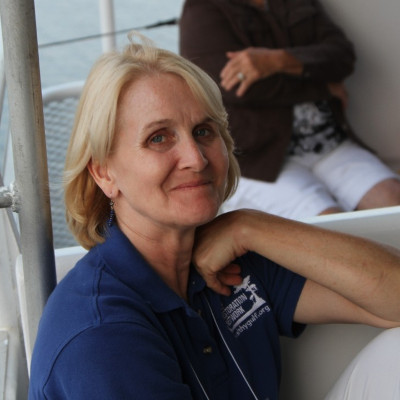 Here on the East Coast we are still recovering from the damage inflicted by Hurricane Sandy at the end of October (and let’s not forget Hurricane Isaac at the end of August). The destruction was a sharp reminder of the connection between environmental degradation and natural disasters. Cynthia Sarthou seeks to help others see these big picture environmental connections.

Cynthia “Cyn” Sarthou is the Executive Director of The Gulf Restoration Network (GRN), an organization that strives to empower citizens to both protect and restore the Gulf Region. Cyn has been the Executive Director of GRN since its birth in 1995 and works to elevate regional issues to a national level, and monitors federal agency action affecting endangered species in the Gulf states.

Cyn has tirelessly campaigned to protect the Gulf. One of her accomplishments includes the closing of the Yazoo Pumps project. First proposed by the Corps of engineers in 1941, this would have been the world’s largest hydraulic pumping system, predicted to destroy 200,000 acres of wetlands in the Mississippi Delta. In 2008, thanks to her work, the EPA nixed the project due to its environmental impact.

In addition, Cyn received the Peter Benchley Ocean Award in 2010 as a “Hero of the Seas.” The award celebrates achievements of those who protect coasts, oceans, and the communities that depend on them. She was also a 2010 National River Hero. Cyn is also an expert in her field and has even testified before the United States Congress in regards to effective clean-up strategies in the Gulf.

Cyn is not afraid go to against big companies and politicians in order to protect the gulf, especially in terms of critiquing BP’s cleanup efforts after the oil spill in 2010. Nor is she afraid to be different or vocal about her opinions. I would go on to tell you how cool the Gulf is, but I think Cyn does a better job of that. Thanks for talking with us Cyn!

Enable a group of engaged citizens to effectively advocate for clean and sustainable water and habitat in Mississippi — a highly under-served state in terms of funding to address environmental issues.

Robert Dudley, CEO of BP? Why is BP unwilling to truly invest in environmental and economic restoration of the resources affected by the BP drilling disaster?  Are profits really more important to the company than the people of the Gulf?

Glenn Close, because she plays women with strong personalities and, I have been told, we look alike.

The 1st Amendment is really the most important of all of the freedoms in America, so we should take advantage of its provisions. In other words citizens need to raise their concerns and petition the government for change and hold government accountable.

Ghandi, Martin Luther King, Medgar Evers  — anyone who puts their life on the line for what they believe. (I am not sure I would have the same courage).

Although American, I went to high school and college in Canada. Although my mother was from the South, the move from liberal Toronto, Canada to conservative Oxford, Mississippi in 1978 resulted in some serious culture shock.  For example, while I was used to speaking frankly about what I felt, the women at Ole Miss rarely did so for fear they would not appear feminine.  Additionally, my use of sarcasm (a regular part of my speech in Toronto at the time) and my tendency to wear jeans and a t-shirt were not appreciated.   Needless to say, I felt like quite an outcast. Maybe that is why I now feel no discomfort working in the activist community – which is still considered well outside the main stream in the South.

WHAT QUESTION(s) DO YOU WISH I HAD ASKED?

What is it about the Gulf that motivates you to fight for its health?

Answer:  Although not well known to most Americans, the Gulf of Mexico is incredibly beautiful and diverse.  Take for example, the marine mammals of the Gulf.  Most people are unaware of the diversity of species of mammals that call the Gulf home. Thirty-one species of marine mammals are known to frequent the Gulf, and 28 of them are dolphins, porpoises and whales. The Gulf is home to a population of sperm whales that, before the BP disaster, was estimated at over 1,000. (It is unclear how that population was affected by the disaster). Other whales, found in the Gulf include the Bryde’s, short-finned pilot, false killer, pygmy killer, and melon-headed whales.  There are also at least 15 Dolphin species found in the Gulf, including killer whale (the largest member of the dolphin family). The Gulf really is an amazing place!