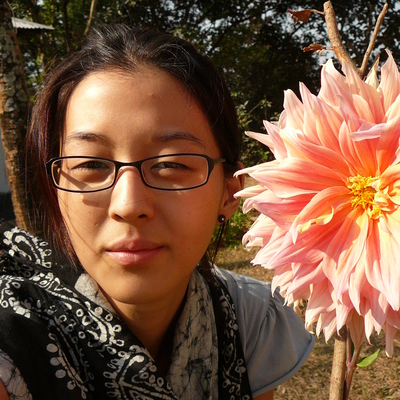 Slavery does not make for great “water cooler conversation,” except of course when a major motion picture called 12 Years a Slave wins three Oscars including the coveted Best Picture award, and is re-released in 1,000 theaters around the Nation. Barring this week’s anomalous mashup of pop-culture and America’s “peculiar institution,” we tend to think of slavery as a topic best suited for history books.

Gloria Shin, a twenty-something Baltimore, MD-based graphic designer, wants everyone to know that slavery, also known as human trafficking, is alive and well. In fact, of the world’s estimated 30 million slaves, there are 60,000 here in the United States, with Washington, DC and Baltimore claiming some of the highest numbers. Gloria left her full time marketing job in August of last year to become a Digital Activist Fellow with the Polaris Project, an organization in the global fight against human trafficking and modern-day slavery.

To be clear, Gloria left a full-time paying job for a short-term assignment (in a different city – Washington, DC) at which she would make no money, with no promises about employment afterwards. To do so, she had to raise $12,000 simply to support herself during her personal crusade. Gloria had this to say about her transition on the fundraising page that she created: HelpGloriaEndSlavery.com: “I did not take leaving my full-time job lightly. I recognized that it was a huge risk. It was a leap of faith I took, though, because I felt so passionately about Polaris’ work.”

Gloria served as a member of Polaris’ communications team, building awareness for the cause with Facebook and Twitter, teaching the public to recognize the signs of trafficking and to call in tips to their hotline. For three months, Gloria was a 21st century digital crusader, fighting for a better world. She chronicled the entire experience in a weekly newsletter.

This was not the first time that Gloria undertook a significant effort of service. A deeply religious person, Gloria believes that giving back is not a choice, but a “faith imperative.” In 2008 and 2009 she lived in Dhaka, Bangladesh working with the Mennonite Central Committee to design and develop new home products geared towards the international commercial and fair trade markets. Earlier in her career she served as an Outreach Program Instructor with the Girl Scouts. Even today, as principal of her design firm, Gloria is quick to highlight her mission of building “brands with dignity,” and working with mostly nonprofit clients.

“My goal professionally is to help those who do good, do good better. I care deeply about all human rights issues, human trafficking being just one of them … Ultimately, my goal is to help build brands and leverage that brand power for the greater good.” Thank you Gloria for your work around slavery, for the example of service that you set for peers, and for answering our questions.

To make a better world possible. In theological terms, to bring Christ's "Upside-down Kingdom" to Earth, which is "here but not yet."

Polaris Project provided me with an unparalleled educational opportunity. Although my graduate studies were in international community and economic development; in 2008, human trafficking was not a major focus and was not included in the curricula. The Fellowship provided a 60-hour training on human trafficking, led by the field’s leaders, with theory and practicum juxtaposed throughout. We reviewed case studies, learned about the organization’s history and watched numerous documentaries. The experience was enlightening, haunting and disturbing, all at once. There is one documentary in particular, Very Young Girls, which we watched together that will never leave me. This newly-found, in-depth understanding helped me grow as an activist and advocate. It further developed my compassion, empathy and understanding of human trafficking, and all those affected.

Giving is a way of living and being. As a Christ-follower, giving is not an option; it is a faith imperative. I believe that we are all here to do our part, especially those of privilege (myself included), if we are to have a shot of bringing relief to those who are suffering, curing diseases, ending extreme poverty, etc. We are to love our neighbors as we love ourselves.

WHO IS A LIVING HERO, AND WHAT WOULD YOU ASK THEM IF GIVEN THE CHANCE?

Malala Yousafzai. I would ask her where she find her inner-strength and endurance. Her story reminds me of David and Goliath in some ways. As Malcolm Gladwell writes, Goliath may have been a giant, but the Bible narrative gives us clues to Goliath’s physical weak points (e.g., myopic vision), and challenged traditional notions of strength.

SHORT ANSWER: Money. LONG ANSWER: After working in the nonprofit sector for the majority of my career, I have realized that the way nonprofits are funded – and therefore operate – needs to change. Namely, the nonprofit “90/10 percent pie” needs to change. Perhaps I’m biased, because I always am squeezed into the 10 percent of the pie (graphic designers and marketing professionals like me are lumped into this 10 percent “overhead” category), but there are stories that prove otherwise. If we want to solve the world’s most pressing problems, like human trafficking and poverty, we have to be willing and able to find the best and brightest talent to do this. We have to change the pie. If you’re a funder, board member, government official, I encourage you to think about the traditional nonprofit model, and to watch Dan Pallotta’s TED talk about this. Are we going to be “pie growers” or “pie givers?”

WHAT IS A BURNING QUESTION YOU HAVE FOR READERS?

I’m always interested in learning about what gets people up in the morning. What gives you hope? What motivates you?

I am a classically-trained pianist and wanted to go to conservatory. Unfortunately, I had terrible stage fright that ultimately led to my auditions’ demises.

Not to sound cliché, but I truly believe that everyone can make a difference. Start with your own neighborhood. Start seeing your surroundings with an open mind-heart (cf. ancient Jewish worldview). But don’t just look for the problems; look for the capacity and potential. Most importantly though – and I cannot reiterate enough -- the importance of being a good listener, and approaching all things with humility.

QUESTION: What is the role of the Church in fighting injustice? ANSWER: The Church must be present. We cannot run away when things get hard, uncomfortable or when they challenge our theologies. We must challenge, deconstruct and destroy any notions we have of the “other.” In the anti-trafficking movement, I’ve noticed how there are many religious groups involved (mostly Christian), which is great. But what else I’ve noticed, is how these groups, often only seem to care about certain types of trafficking victims and not others. And more often than not, LGBT youth are either excluded from or not considered for services. This is just wrong and sad, considering how LGBT youth are at high risk of becoming trafficking victims. Many LGBT youth have been kicked out of their own homes. Church should be a place where the door is always open for all.