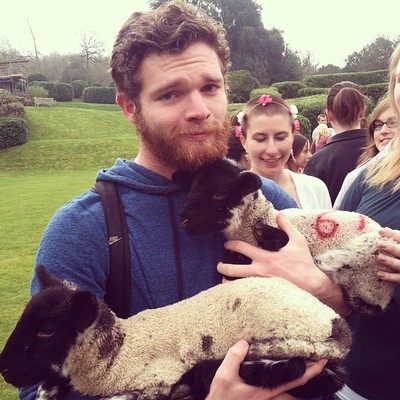 Do everything I can to make the lives of others more enjoyable and meaningful.

If you think this is going to be just another profile about a college fraternity dude with a penchant for Garbology and Steve O from the show Jackass, you would be correct. But only kind of …

When Hezekiah Eibert arrived at Wabash College in Crawfordsville, IN, the incoming freshman had not lived in the same location for more than a few years ever. The oldest son in a military family, Hezekiah Eibert, had bounced around the globe: New York, Sydney, Iowa, North Carolina, and Virginia Beach. Now a junior, Hezekiah has lived in the Phi Kappa Psi fraternity longer than anyplace else in his life.

Something about laying down roots ignited a passion in Hezekiah to connect with the people in the Wabash and Crawfordsville communities. What Hezekiah has done in just two and a half academic years is inspiring. First the basics:  Hezekiah is Phi Psi’s philanthropy chair, a member of the Sphinx Club (promoting campus unity), part of the Wilderness & Adventure Crew and a mentor to local youth through College Mentors for Kids. His approach would do any parent proud: “I think that these are some of the most opportunity-filled years of our lives and if I can fit in experiences in clubs with all my interests, I will.”

Hezekiah kicked things up a notch this past summer, while serving as Wabash’s Sustainability Intern. His goal was to make Wabash green. As he described in a blog about his internship: “… boy did I hit the ground running. Within the first two weeks, I had found over $6,000.00 in savings for the college, restructured our fallen bike rental program, and created a community service event for freshman orientation next year.” Hezekiah realized that Wabash wasn’t efficient when it came to recycling. He began sorting the trash himself. “Every morning, I’d get out there at 6:30 and pick up all the bags, load them in the truck and separate them. I noticed that they weren’t being put in the right bins. It was costing us a lot of money.”

From there, he used his sorting skills to develop a Garbology project. Its goal was to educate students on the value of proper sorting techniques. To prove his point, he had students sort a day’s worth of campus trash and improve Wabash’s rate of recycling. The group reduced 35 bags of garbage down to only two. The recyclables from that day’s work were handed over to a visiting professor of art who worked with students to create an outdoors art installation that remains standing today.

Hezekiah’s long term goal is to become a self-sustaining farmer, but he’s in no rush to graduate (currently he’s spending a semester abroad in England). “It’s so easy to sit back, do your homework and play video games and say, ‘oh my life is so hard.’ It’s important to realize that there are people who definitely have it harder than me. I have a great opportunity to give back.”

To do everything that I can to make the lives of others more enjoyable and meaningful.

This work has allowed me to truly put my own life and desires into perspective. Seeing how much of a difference can be made by giving so little. Spending an hour walking dogs from a shelter, or helping at habitat for humanity instead of watching television, not only makes me feel better about how I spend my time but it is really making a difference.

My Fraternity, Phi Kappa Psi, is founded upon The Great Joy of Serving Others, and that’s what I get. I find no greater joy than helping others and making their days brighter and easier even if indirectly.

Stephen Gilchrist Glover or Steve-O. He is a hero for me because he is someone who has battled through serious drug addiction issues and come out a much better and stronger person because of it. He helps others to reach their goals and inspires people to always chase their dreams and just to do what makes them happy.

A good calendar, a group of close friends, an open mind, and a good pair of shoes. Setting up a list of reminders and events in my phone allow me to balance my many philanthropic plans and make sure I am where I say I am going to be to help those in need. A close group of friends going to different philanthropies will increase your range of organizations and causes you are working with, opening your mind to new issues or concerns that you may not have been open to previously. Lastly, a good pair of shoes to work, walk, and play in is key, you never know what kind of work you may end up doing, but its always best to be prepared.

Life, Love, and the Forgotten. It would be a collection of poetry and short stories. I would travel this Nation and collect the untold stories of love, inspiration, trials and triumph that are left wasted across our country just begging to be told.

I have had great struggles with depression. I have been in some very, very dark places in my life and they have made me who I am today. By being that low, I was able to realize that even though I was suffering and emotionally going through a lot, it was nothing compared to the suffering that others go through each and every day. From then on I have been able to take all of my own problems with a bit more than a grain of salt and twist most things into positives. It also inspires me to help make sure others never get to that point and that I can help them see that their lives can be just as good as they can dream.

You don’t have to start a major corporation, or donate a large sum of money to make a difference. Every action you make, be it donating an hour of your time at a soup kitchen, giving a friend in need a ride to work or even opening the door for a stranger, everything you do can make a difference in someone’s life and if you have the ability to make a positive change, you should. Give all that you can, realize that we live in a world where we put far too much importance upon money, and material items rather than our experiences with those who we care about and our true happiness.

QUESTION: What causes would you like to see more help directed towards? ANSWER: Education. I believe that the education system in most of the world’s nations today are broken, and those who are in “underdeveloped” nations that don’t even have those opportunities for education are in even worse shape. Without a solid foundation of knowledge and intellectual stimulation, we cannot move forward as a nation of great thinkers and innovators.