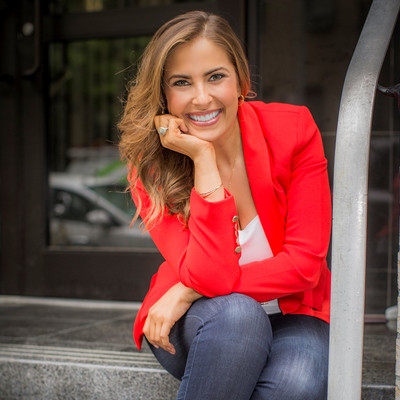 To make other people's lives better, and to let the people in my life know how much better they make mine.

Her name is Jessica Abo. She is a freelance anchor and reporter for NY1 News, covering everything from local news to Fashion Week (which automatically makes her awesome). But long before Jessica was reporting on the news, she was making headlines in the most altruistic of manners.

In 1997 as a high school junior, Jessica read about the Washington D.C.-based Thompson family, the first black family in the U.S. on record to deliver sextuplets. The national story appeared next to another article about recently delivered sextuplets, these belonging to the white, Iowa-based McCaughey family. Yet while the McCaugheys were lavished with widespread support in the form of toys, clothing, and supplies, the Thompsons received no help for their five children (one was delivered stillborn). Like many people, Jessica was appalled by the inequity of the situation. But then, unlike most do, Jessica took action.

The next day, Jessica shared the Thompson’s story with her principal, and requested an emergency meeting be held for her junior class at Moravian Academy in Bethlehem, PA. Jessica mobilized her classmates and, by the end of the meeting, had created subcommittees and assigned tasks to each of them. Jessica and her classmates raised thousands of dollars in donations and supplies, but that was just the beginning. Jessica then convinced her principal to grant her and her classmates the day off from school to personally deliver the gifts to the Thompson family in D.C. prior to Christmas.

FOX and CNN covered the story and within a week, Freddie Mac gave the Thompson family a new home; a car company gave them a van; and Howard University gave free college tuition to all five of the surviving children. Soon after, Jessica attended the Thompson sextuplet’s first birthday at Howard University, and a bit later, they all came to Bethlehem, PA for Jessica’s high school graduation. This year, Jessica sent the Thompson sextuplets presents for their seventeenth birthday, and she texts with them regularly.

Jessica has tremendous ambition, a solid work ethic, and deep-seated family values. She says “I’m in the door making business,” because for every door that has been shut in her face, she has built a new one. Now, Jessica spends most of her time building and opening doors for others as a way to say thank you to all the people who have helped her and her family along the way.

During any given week, Jessica is working four jobs, while tackling a myriad of volunteer projects. In addition to her duties at NY1 News, Jessica is the Chief Inspiration Officer at Apploi, where she serves as a career mentor for job seekers and hosts weekly videos to help community members get hired. Just this month, she became a Digital Host at Buzz60, where she helps share today’s top stories with attitude. Lastly, Jessica was recently named the Danny Siegel Changemaker-in-Residence at United Synagogue Youth (USY), where she will spend the coming year speaking with teens across the country about a variety of topics, including how to be social change agents.

On the side, Jessica launched her boutique consulting firm Match4Good, Inc., which leverages her unrivaled matchmaking skills to create impactful and often unintuitive connections. Match4Good connects people with causes; goods and services with events; job seekers with employers; and it even makes “love connections” (when they set up couples, each person is asked to make a donation to his/her charity of choice in order to get the other person's phone number).

Jessica Abo does a lot of good for a lot of people. So, I want to now say thank you to Jessica for never missing an opportunity to take action and help another person.

My purpose in life is to make other people's lives better, and to let the people in my life know how much better they make mine.

I see the world through very large social lenses. Consequently, I spend most of my time connecting resources that exist with those who need them. For example, through my company Match4Good’s partnership with the Gift of Life Foundation, seven people with Leukemia have found perfectly matched bone marrow donors. I understand none of us has been charged with the task of doing everything to make the world a better place; however, I do think we are all responsible for doing something.

Actress and philanthropist Kelly Rutherford, swabbing the inside of her cheek for Match4Good, Inc. and the Gift of Life Foundation’s bone marrow drive.
3

My grandfather, Maurice, is my living hero.  He is 92 years old and is a Holocaust survivor who saved hundreds of people during World Word II.  He had a stroke a few years ago, so it is hard for him to speak now.  I wish I could re-ask him every question I ever asked. I miss hearing his voice, his stories and his jokes.  I wish I could talk with him about my grandmother.  She died when I was 16.  I wish we could talk about our family; what’s going on in the world and so much more. If it weren’t for him and my grandmother building a life in America after the war, my mom would’ve never met my dad when she was 13 - and my sister and I wouldn’t be here.  He is a hero to my entire family.

What is the last nice thing you did for a family member, friend or stranger when no one was looking?

My first book is in the works, so I can’t share the title just yet!

I am an open book, so there isn't much I don't discuss!  I think social media makes it look like our lives are perfect, but I am the first to admit mine is far from it.  Whether I'm up five pounds, went on a bad date or have hit a bump with a project I'm working on, I feel just as strongly about sharing those stories as I do the successful ones.  With that said, if I had to pick one thing most people don't know, it would have to be that when I was little two birds bit me, on two different occasions, so I have a phobia of birds.

Be clear about what you want to accomplish and why.  It may take hundreds of "no's" before you get one "yes." You may expend an incredible amount of time, energy and resources before you raise one dollar. Whatever you're trying to cure, build or produce - never lose your passion or yourself in the process.  Make sure your life is balanced. The most amazing philanthropists I know don't miss board meetings - but they don't miss birthday parties, either. Find a place for everyone who wants to be involved and always say thank you.

Where do you see yourself in one year?  Right now, I am working on launching my own digital platform for teenagers and college students.  My production team and I just shot our pilot and we hope to be up and running this fall.  With the help of our amazing board, media partners and ambassadors, I hope one year from now, we will have empowered millions of people around the world.  And if in one year, if I'm no longer part of this crazy dating scene in NYC, that wouldn't be so bad, either.  See? I told you I was honest! :)