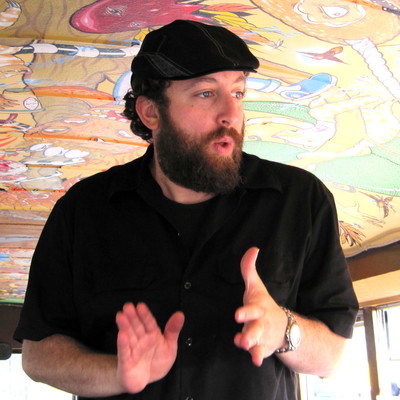 Tell stories that inspire people to walk an audaciously righteous path, allowing them to realize their highest potential.

Joshua Safran provides us a roadmap on how to redefine bravery. He says bravery isn’t a lack of fear, it's understanding our fears and battling them anyway. This is especially true when helping those impacted by family and domestic violence find a life different than what they were given.

Joshua’s work on family violence goes back more than a decade. He was featured in a documentary, “Crime After Crime” which told the story of Deborah Peagler, a woman brutally abused by her boyfriend. She was sentenced to 25 years-to-life for her connection to his murder.  Joshua and his legal team won her freedom. The gripping and award-winning film debuted at Sundance and had its television premiere on Oprah’s OWN Network.

While collaborating with Deborah, she encouraged Joshua to share his own stories of family violence. She asked him to summon his own bravery, so that he might serve to help others – especially men and boys who struggled with similar challenges.

Out of that came the literary memoir Free Spirit: Growing Up On the Road and Off the Grid. It’s a gripping and powerful account of Joshua’s childhood. Parts of his story are unique, such as growing up with a single mom searching for the golden age of the 60’s long after it had ended. However, parts are all too universal, including life as a young man trying to live with an abusive stepfather.

Today, Joshua is an attorney but also an outspoken advocate for social justice. He uses his life story to help inform and empower others to battle family violence.

Telling stories that inspire people to walk an audaciously righteous path, allowing them to realize their highest potential.

Writing Free Spirit transformed my most shameful and humiliating secrets into my most powerful assets and defining characteristics.

A tremendous sense of satisfaction and personal & spiritual healing.

Ayaan Hirsi Ali – how do you renew your bravery every day?  Ali is a Dutch-Somali activist who fights for global women’s rights (and against female genital mutilation).

Breaking through the awful empty noise that defines the internet age to engage in meaningful conversation on the substantive issues of our day.

How can the stories of others inspire you to (re)dedicate yourself to the issues you are passionate about?

I’ve just written one called “Free Spirit: Growing Up On the Road and Off the Grid.”

I still carry with me deep shame that I wasn’t able to protect my mother from my abusive step-father when I was a boy.

There is no one else but you.  If you are waiting for an expert to materialize and solve the problems of your community, you will die waiting.

QUESTION: With so many things to do, why take time out of everyday to give back? ANSWER: Not only is it the righteous path, it’s the path that will bring the most meaning to your life.