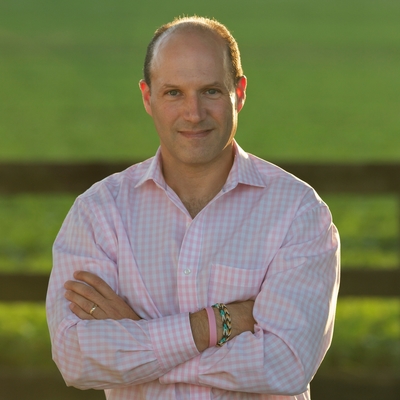 Inspire others to find their Why; to start small, dream big, and live the life they deserve.

Many people believe that what separates humans from the other species is our ability to form scenarios in our mind, and then turn them into reality. See your future; make it happen. By this definition, Mark Brodinsky is a purveyor of humanity and a shining example of what it means to turn big dreams into meaningful reality. Mark has seen his future, or as he calls it, his Why. “My Why is to positively impact the lives of a billion people and to help them find their Why and their Way.” A billion people. Perhaps I should back up a few years, to the time before everything changed.

In April of 2012, Mark’s world was rocked when his wife was diagnosed with breast cancer. Up until that moment, life seemed ... well … fine. A former Emmy Award-winning TV producer with WJZ-TV in Baltimore, MD, Mark successfully transitioned to the financial services world in order to provide a more stable lifestyle for his wife and two daughters. Mark excelled professionally, but still missed the thrill of bringing stories to life and sharing them with the masses. Then came Debbie’s diagnosis.

Almost out of instinct, Mark began a Caringbridge.org journal to chronicle his family’s collective journey and cope with his personal fears. His writing was emotionally honest, but also captivating, as evidenced by the comments he received after sharing his posts on Facebook. “My wife’s breast cancer diagnosis brought me back to my roots of being a writer. It gave me catharsis and helped me reconnect with who I truly am.” Friends began urging Mark to write a book based on his journal entries. At the time, Mark was ravenously demolishing the program Living Your Best Year Ever, so he rightly identified the import of the moment. Carpe Diem! Mark educated himself on the ins and outs of e-Publishing and never looked back. On September 26 of 2013, roughly 16 months after Debbie’s surgery to remove the cancer, his book It Takes 2. Surviving Breast Cancer: A Spouse’s Story, was published on Amazon. Five days later, it was declared a #1 Amazon Best-Seller.

But his book was just the beginning. Here Mark would want me to quote the other Mark (Twain that is): “The two most important days in your life are the day you are born and the day you find out why.” Equipped with his Why, Mark launched a blog/website, “It’s just About … Life” and “The Sunday Series,” chronicling stories of courage, hope and inspiration. [Full disclosure: I’ve been featured in the Sunday Series … call this inspirational reciprocity]. Mark likes to share lessons and stories on personal growth, helping others to find their WHY and find their way. His blogs have also been picked up by Huffington Post, where he is making the Sunday Series a regular column.

Mark’s experience in finding his own Why has brought a greater sense of purpose and fulfillment to all aspects of his life. In 2013 he received the Professional Agent of the Year Award with New York Life in Baltimore, and he is a three-time Qualifying Member of the Million Dollar Round Table for financial services professionals. He actively speaks on the topic of finding your Why, and has a second book in the works.

A billion people served? That’s ambitious. Will he reach it? I don’t think it matters. Mark would tell you that life is not about some end-game, rather it’s about the journey and how you choose to live the days you’ve been given. I’m proud to know you Mark and look forward to seeing what comes next.

To inspire others to find their Why; to start small, dream big, and live the life they deserve -- through my writing, speaking, and sharing all that I learn about personal growth and gratitude.

WHAT DO YOU KNOW TODAY THAT YOU WISH YOU HAD KNOWN TEN YEARS AGO?

I wish I knew about the true power of gratitude and of “purposefully” becoming a better person, not just saying you will, but actually taking specific measurable steps to make it happen and tracking those activities. The magic of splendid discipline. I wish I had started all of this ten years ago, and planned my financial future back then to support my dream today instead of having to balance both at the same time.

A living hero: Darren Hardy. He is my best friend and he doesn’t even know my name, nor have I ever spoken to him, but I listen to his interviews on CD’s in my car, and his interview subjects inspire me, teach me and make me dream even bigger, and Hardy’s recap each month has literally brought me to tears tapping into every emotion I have to live a life as big as humanly possible. If I were to meet him I would ask him what started it all for him, and how has he so successfully built this business which is everything I want out of life.

I had a speech impediment when I was younger. I can still remember in 4th grade when the teacher called on me to answer a question and the answer was the Declaration of Independence. I knew the answer. But I couldn’t get the “d” out for fear of repeating it over and over in a stutter. So I pretended I didn’t know the answer. That was the beginning of the end, and a life I’m not proud of because I avoided situations and words which would lead me to stutter. I never told my parents, though plenty of times I wanted to so badly. I bailed on the big high school play, with two people to go before my reading for tryouts because I was afraid I would stutter. I went into TV as a producer, not a reporter because I was afraid I might get in to a breaking news situation in front of the camera and not be able to say certain words. Even when I did get an on-air role I used every synonym you could think of to not say the words which would cause me to stutter. I still do that to some extent today, though it is much more infrequent then it used to be. I am embarrassed and sad about hiding it for so long because it definitely affected the trajectory of my young life and early adulthood.

I get the satisfaction and magic of gratitude and sharing something of value. I love to give to other people, especially when it can change someone else’s life. In life you must give, give, give before you earn the right to ask. It should always be about what you can do for others first, before what you get out of the deal. Give and receive cannot be over emphasized. When you give it comes back tenfold, maybe not right then, but over time.

WHO IS YOUR FAVORITE ARTIST?

That’s easy: Michael Jackson. I was so impressed and enamored with his God-given talent and his ability to touch people all over the world. I'd ask him what it’s like to be the most famous person in the world. How do you do that; how do you get there? My favorite song would be Man in the Mirror because of the lyric: "if you want to make the world a better place, take a look at yourself and then make a change." We all must hold ourselves accountable to being the best we can be, it’s the reason we must find our WHY. If we look in the mirror and truly look into ourselves, we can harness the power. I know because I’m living it. I’m trying to make a dream come true and it’s not an easy process by any stretch of the imagination (nothing worthwhile ever is), but it’s rewarding.

DESCRIBE A BELIEF THAT IS CORE TO YOUR BEING.

I believe that we are all meant for something big in life which fulfills our purpose, and is fueled by our passion. But we must figure it out, it doesn’t just happen. We are all meant to shine. If you can identify your true gifts, you can discover what you love to do. That intersection means you will never again work a day in your life. It’s the day you stop working and start really living. It becomes something you never want to retire from. The power is within every one of us and I’m not preaching that right now, I’m telling you I believe it with every ounce of my being. It's not an easy thing to do. You just don’t trip over it. You must go after it and make it your reality. I wrote a blog about this very thing … and took it from the most inspiring wrap-up from Darren Hardy I ever heard, I must have listened to it 50 times. It’s actually the subject of the blog I wrote called Passion. Read it, you won’t be sorry.

WHAT ADVICE DO YOU HAVE FOR OTHERS WHO ASPIRE TO LEAD A LIFE OF PURPOSE?

To lead a life of purpose you must begin from the inside-out and find your why. Without the why, the how, the what and the way do not matter. Because if you pursue something that is not in line with your why you will never feel truly fulfilled. It is difficult if not impossible to be significant without this inner purpose. And whatever that purpose is it will no doubt be something which is in service to others because that is what life is all about. You will do something which either relieves someone else’s pain or helps them gain. And understand you cannot pursue success, you must attract it by the person you become. “Work harder on yourself than you do on your job” :-)

WHAT WOULD THE TITLE OF YOUR NEXT BOOK BE?

I am seriously considering the title of my next book to be Making a Difference. Stories of Courage, Hope & Inspiration: The Sunday Series, with Mark Brodinsky

QUESTION: When you see people who are successful, do you ever stop to wonder how they got there, or do you just look at them and think, “well they’ve just got It, or they are just lucky?"  ANSWER: Everyone has a story. Everyone has struggles. Everyone has something in their life that has happened, or is happening. You have no idea what they went through to get where they are now, what obstacles they had to overcome, what struggles they faced, nor do you see the hard work they put in to making a dream come true. You can’t compare your backstage to someone else’s stage-front and find happiness. Comparison is the thief of joy. Success doesn’t bring happiness, happiness brings success