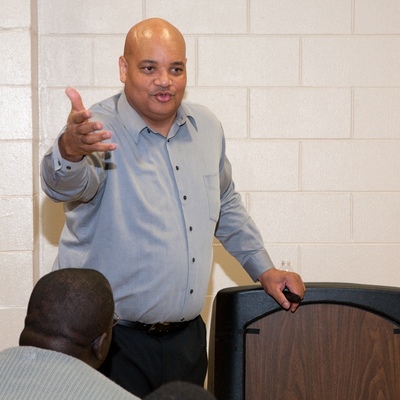 Motivate and inspire young people of color to cultivate their potential.

Percy Hayles knew that he had something special. On a Saturday morning in Roxbury, Mass., nearly four years ago, he was able to draw nearly 50 area-teenagers away from their beds and video games to learn life management skills.

Percy’s long career in education included a brief stint in the public school system, which he says was long enough to determine that many schools operate as “failure factories” – perpetuating low standards for students, especially students of color, and leaving them ill-prepared for college and careers.

“One young man asked for help emailing a prospective employer,” he recalls, “And he couldn’t communicate professionally. I thought to myself, ‘I gotta do something.’”

And so he did.

The Young Men’s Success Series (YMSS) engages vulnerable young men from some of Boston’s toughest neighborhoods by offering bi-monthly workshops on topics ranging from money management to community service to “People Skills 101,” as well as mentoring, academic advising, summer job placement services, and field trips to workplaces like Google’s Cambridge campus and MIT labs. Above all, Percy and YMSS strive to instill in them the skills and qualities they will need for life-long success – like professionalism, leadership and integrity – that often aren’t taught in schools.

To find workshop speakers, Percy doggedly pursues some of Boston’s most high-profile business, government and community leaders. He’s secured an impressive roster to date, including Eastern Bank President Robert Rivers, attorney Wayne Budd and journalist Liz Walker, who each have imparted their “wit and wisdom” on young men with whom many would not have an opportunity to interact in their daily lives.

When YMSS starts back up on September 13, it will feature a new entrepreneurship program and enhanced STEM curriculum. And Percy will continue to serve as mentor, teacher, coach, father figure, and so much more to hundreds of young men (and women too).

The day I interviewed Percy, I had the pleasure of meeting Jahlissa, an incoming senior at Wellesley High School who has spent her summer working with YMSS. She credits Percy with helping her achieve academic success and encouraging her to pursue a career in medicine. He’s also taught her communication skills, and how to think positively and make good choices.

“We’re teaching people how to live,” says Percy, “in addition to how to make a living.”

In just one sentence, what is your purpose in life?

To motivate and inspire young people of color to cultivate their potential.

How has your work changed you?

First, it has allowed me to become more patient. Young people require patience, like planting a seed and helping it grow. I’ve also seen first hand how isolated poor people are from the larger society. Finally, it’s taught me responsible leadership. You can’t become angry, and you can’t say the things you want to say. Everything I do and say reflects on the organization.

What do you get from giving/your work?

I’ll have an interesting eulogy. [Laughs]. I have a greater sense of individual purpose. My life has direction and meaning, and I am more connected to people. It’s created a sense of community and family.

What is one belief that is core to your being?

Life is what you make it. When you are unhappy and disillusioned, only you have the power to change. Of course, external factors may challenge you, but you can push back. Everyone’s an author and creator of their own circumstances.

Describe a moment in your life that helped you gain clarity about your purpose.

My college days opened my eyes. I was appalled at my ignorance of African American history and the origins of the problems in my community.

Who is a living hero and what would you ask them if given the chance?

Oprah. She started with nothing, and now she is where she is. I would ask her how could she better use her celebrity to better help communities of color.

What is your favorite inspirational saying?

What would the title of your book be?

Never Take No for an Answer (autobiography) – It can sometimes take a year for a "yes," but the key is to get the job done. My non-fiction book would be called The Invisible Prison. Many people without an education live in isolation from the larger society, making for an invisible prison.

I have a spiritual connection with history, especially the Civil War, due to the nature of the struggle itself. Every major advancement for African Americans has been preceded by some major social upheaval.

What advice do you have for others who aspire to be change agents?

Study history. You’ll learn the minority makes history and the majority benefits. For example, most social movements – like unionization – were fought by just a few people who made change happen for everyone. Also, if you want to help other people, you need to laugh and take care of yourself. Don't be totally consumed by your cause.