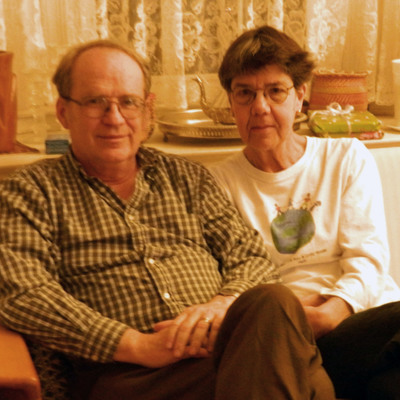 Serve others, especially the poor.

Joyce and Ted Kruse are wealthy beyond measure. Both in their 60s and retired, this husband and wife team of 23 years travels internationally, they operate their own charitable organization, are active members in the church community, and serve as an inspiration to many.

Co-founders of the 501(c)(3) nonprofit Neighbors Near & Far, the Kruses' operation is set up in the basement of their Baltimore, MD row house. Together they offer all of their support to the local community food bank Assistance Center of Towson Churches (the "Near"), and to the Christian Concern for Haiti and its two orphanages, Kay Papa Nou and Unity House (the "Far").

According to friend and fellow traveler Wayne Fritze, “[Joyce and Ted] are tireless in their support of the children in Haiti. Joyce has visited 14 times in four years, often sleeping on the floor of the orphanage so she can better understand how the girls live. She does not want to be thought of as a privileged ‘Blanc,’ as white Americans are generally thought of in Haiti.”

Prior to their marriage, both Ted and Joyce lived in Saudi Arabia. Joyce spent much of her childhood there while Ted worked in Riyadh in the 1980’s. Later, Joyce was a packaging engineer with Unilever and Ted, a college librarian. In fact, it was Ted’s contacts with magazines and newspapers which became their primary source of charitable funding. According to Ted, “most of our support comes from the sale of donated books. Magazine and newspapers regularly receive free books from publishers in the hope of a book review or other mention. Some publications receive more than three hundred books per month and are very willing to donate these books to a worthy cause that will remove the books from their offices.”

To bring this full circle, when I say that Joyce and Ted are “wealthy,” I’m not referring to the size of their bank account (of which I have no knowledge); I’m speaking in the more humanistic and spiritual sense of the word. The Kruses are wealthy because they have dedicated their second act to making the world a better place. Their time, money, talent, networks, resources, all of it is spent in the service of others. Clearly their lives are richer for what they’re doing, as are the communities and the people they touch. Thank you both for your generosity in answering these questions.

The purpose of life is to serve others, especially the poor.

Despite all the evidence to the contrary, the work in Haiti has renewed our belief that there is much good in the world. People unknown to us have supported Neighbors Near & Far financially. In Haiti, people who have very few material possessions are often willing to share with others.

Neighbors Near & Far is very small, but we will make a big difference in the lives of the 30+ children in Haiti. Just because we cannot solve all the problems of poverty in Haiti does not mean there is nothing we can do.

We are fortunate to have a living hero, Dr. Cecil De Sweemer, who we communicate with regularly. Dr. De Sweemer is a medical missionary in rural Democratic Republic of the Congo. She is 74 years old and has Parkinson’s but still regularly sees patients and administers the project, Butoke.  All her pension and Social Security income is used to run Butoke. She is a model of sacrificial living.

Haiti and our orphanages have a host of needs.  Because of the lack of infrastructure, the only ways to transport goods to Haiti is by airline luggage or large overseas shipping containers. These transport restrictions mean we must turn-down most material donations. Financial support is the best way for donors to support Neighbors Near & Far.

“Not all of us can do great things. But we can do small things with great love.” -Mother Teresa

The Second Half is the Best would be the book title. We hope our work in retirement with Neighbors Near & Far will be the most productive part of our lives.

We are both rather private persons so sharing personal thoughts with others is difficult. So, what we rarely share would be a long list.

Many people are purpose-driven philanthropists but fail to do the basic setup for a sustainable organization. At the very minimum, get a bank account in the organization’s name to separate personal and charitable funds. Incorporate to further support the separation and to get certain legal protections. Get 501(c)(3) status from the Internal Revenue Service to insure donations are tax deductible.

QUESTION: Why do you want to be on this blog? ANSWER: We were reluctant to submit to Talking GOOD because we believe the focus should not be on us (Matthew 6:1-4). Our hope is that readers of this blog will be inspired to start their own projects. It really is possible to run a charity that makes a difference out of a basement of a Baltimore row house. Our belief is retired people have a lifetime of experience and many contacts will be even more successful than younger purpose-given philanthropists.