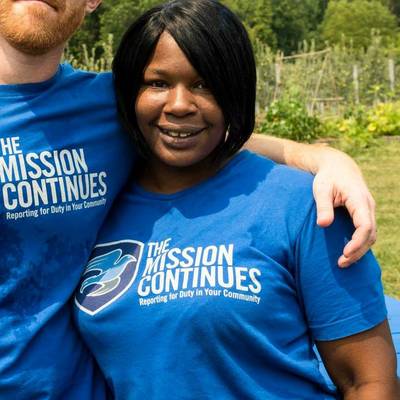 Serve others by making sure that no one ever feels alone.

For an HTML version of this post, visit this link.

Marine Corps veteran Tina Thomas is 34-years-old, but she’ll be the first to say that she looks young for her age. Tina’s youthful countenance, combined with her positive disposition and high energy are infectious. They also serve as an effective mask, concealing the trauma and struggles that she carries with her from a grim childhood. “I’m shy, and I take everything to heart. My outgoing personality is a front to hide the vulnerable me.”

Born in 1980 in Harvey, IL, a suburb of Chicago, Tina spent the first 18 years of her life moving around between 13 different foster homes and five group homes. In her own words: “Growing up in the foster care system left me feeling empty and incomplete.” Beyond the lack of familial support and consistency, Tina – like an unfortunate too many other kids in foster care – was the victim of physical abuse, emotional abuse, and sexual abuse. In early 1996 (despite never having broken the law), Tina was assigned a probation Officer, Mary Beth Ryan. That summer, Mary Beth invited Tina to be a peer mentor at a special camp for abused girls. It changed her life forever.

“That weekend was the first time I felt needed and that I belonged. It is also when I realized that I wanted to make an impact on people's lives.” In 1999, two weeks after graduating high school, Tina enlisted in the Marines. She served for four years, stationed in Camp Pendleton, just off the Pacific Coast in southern California.  Military service not only allowed Tina to grow as an individual and a professional, but it provided her with a sense of belonging, something for which she had so yearned as a child.

In 2013, Tina moved from Chicago to Washington, DC, along with her daughter Arianna, now age eleven. She works as an administrative assistant at the Federal Aviation Administration, and continues to serve her community as a serial volunteer, often alongside her daughter. In 2013, Tina joined The Mission Continues’ DC 1st Service Platoon, fighting malnutrition and obesity in the nation’s capital. She intends to also join the DC 2nd Service Platoon, helping youth develop lifelong commitments to personal health and fitness. “All of this service work provides me with structure and growth. It keeps me motivated and gets me out there so that I can continue to make a difference.”

Thank you, Tina, for your strength and perseverance. Thank you for continuing to serve us here at home, and for allowing us to get to know you better this Veterans Day.

In recognition of Veterans Day, Talking GOOD has partnered with The Mission Continues to shine the spotlight on veterans who are making a difference here at home. Drawing from The Mission Continues’ community of more than 3,000 fellows and service platoon members, we are profiling three veterans who continue to give back, even as they endeavor to find their own paths. Their stories are intensely personal, and at the same time, they represent a generation of men and women. These are their words.

WHY DO YOU CONTINUE TO SERVE HERE AT HOME?

I continue to serve at home because this is my home and these are my people. I see first hand the great need within my community, and so I take on its struggles as my own.

OF WHAT ARE YOU MOST PROUD?

Being humble is my greatest asset and what I'm most proud of. I have never had an easy life but I have never wished for a different one. My struggles and achievements have allowed me to impact lives with not only book knowledge but life experience. It is that, that has allowed me to relate directly to others. Knowing you are not alone and feeling not alone are two different things. Being humble has allowed me to connect with individuals on an emotional level which in return develops a sense of trust, loyalty, and commitment that replaces the empty feeling of being alone.

DESCRIBE A MOMENT THAT CHANGED YOU.

Growing up in the Foster care system left me feeling empty and incomplete. In 1996 I was assigned a probation Officer Mary Beth Ryan, I was none the less displeased with that assignment. I had never broke the law nor was I ever kicked out of a school. I avoided contact with this women at all cost, we were two different races and classes of people. In June of '96 she caught up with me and asked that I come to camp with her as a peer mentor. It is that moment that my life changed forever. The camp was a special camp for abused young girls. That weekend was the first time I felt needed and that I belonged. It is also when I realized that I wanted to make an impact on people's lives. I joined the Marines two weeks after graduating from high school and continue to fly back for camp each summer until funding was eliminated. It was the most rewarding and life changing experience I've ever had.

WHAT DO YOU STRUGGLE WITH THE MOST SINCE STEPPING DOWN FROM ACTIVE DUTY?

The hardest thing for me has been finding work and affordable housing. It’s a big misconception that once out of the military, that a job will be easy to get. And with no job, I faced homelessness. It was a struggle to find a safe place for me and my family, as many VA shelters accept neither women nor families.

WHAT DO YOU WANT PEOPLE TO KNOW ABOUT THE VETERAN COMMUNITY?

That we are still here to serve. That we still love our country and fellow Americans. That we are not immune to the hardships that civilians face, and that we are not a generation of entitlement but one of hard work and determination.

WHO IS A PERSON YOU ADMIRE AND WHY? WHAT WOULD YOU ASK HIM/HER IF GIVEN THE CHANCE?

I admire my foster mother, Barbara Carter. When everything and everyone else had turned their back on me, with Barbara, I had a place to go home to. And not just me but the more than 10 other kids she raised. And even though I’m the most stubborn one (as she calls me), she has never turned her back on me. I would love to know why? Why did she continue to take in kids? Even while fighting cancer last year she still opened her heart and home to new kids.

WHICH ISSUE FACING YOUR COMMUNITY WOULD YOU LIKE TO BRING GREATER ATTENTION TO?

Foster care. No one gives a second thought to a child that was raised in this system after they reach a certain age. No one checks to see if they have a home for the holidays or soup when they are sick. They are America's dark little secret. They are often left homeless and alone. In 2012 in the United States, 23,439 children in foster care turned 18 and were "emancipated" or "aged out."  Where do they go? Who helps them now?

WHAT IS SOMETHING PEOPLE MIGHT BE SURPRISED TO LEARN ABOUT YOU?

That I’m shy, and that I take everything to heart. My outgoing personality is a front to hide the vulnerable me.

MY LEGACY TO THE WORLD WILL BE:

That even at my lowest points in life, I've still reached out to help others to lift them higher.