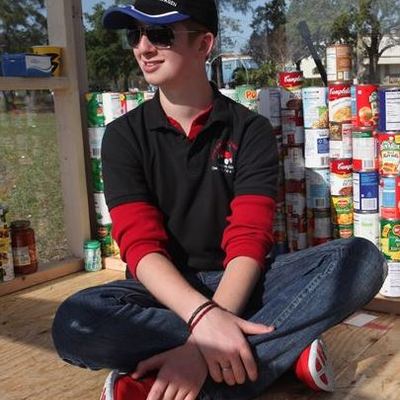 Make a positive difference in the lives of others.

Who would play you in a movie about your life? That was the hypothetical question I used to ask people featured in this series. So I wonder what young Zach Bonner thought when he learned that there was going to be a movie about his life. Barely a teenager at the time, Zach's story would soon be made into a major motion picture from the director who brought us Rudy and Hoosiers (quite possibly the two most inspiring movies ever made). In case you're wondering, the role of Zach was given to child actor Chandler Canterbury, born in 1998 -- just a year after Zach.

So who is Zach Bonner and what did he do to have his story told on the big screen? (**SPOILER ALERT**) Perhaps it's the fact that at the age of seven, he started a nonprofit to aid poverty-stricken children. Or perhaps it was his 2,500 mile walk from the Atlantic to Pacific Oceans at age 13, raising awareness for homelessness. Maybe it's because he's a really great guy!! According to producer Dr. Michael Guillen, "Zach Bonner represents everything that is good in the American character ... the best of vision, of courage, of perseverance."

When Hurricane Charley hit Tampa in August of 2004, a seven year old Zach Bonner pulled his little red wagon from house to house, collecting 27 truckloads of disaster supplies, including tarps and bottled water, which he then distributed to families affected by the devastation. One year later, he established the organization "to continue helping kids more efficiently"and because federal law restricted how many donations he could receive. The organization was christened the "Little Red Wagon Foundation."

What soon followed was an epic series of increasingly challenging walks to raise awareness, funds, and resources for impoverished Americans. 2007: Tampa to Tallahassee, FL. 2008: Tallahassee to Atlanta, GA. 2009: Atlanta to Washington, DC. And 2010: Tampa to Los Angeles, CA. That last walk took Zach six months. By 2010, a thirteen year old Zach Bonner had logged almost 4,000 miles on his young legs and had created a movement in the process. After all, how many teenagers do you know that have their own Wikipedia page, received the Presidential Service Award from our Commander in Chief, been named a hometown hero by Reader's Digest, and perhaps most notably, have Paris Hilton gushing over them on YouTube?

This past March, Zach lived seven days in a 512 cubic feet plexiglass box in a field. With plywood serving as the box's bottom, pieces of cardboard, and a sleeping bag, Zach aimed to recreate a homeless person's lodgings. Naming his fundraising effort "Zach In A Box", he encourage people to donate nonperishable food. He wanted to coat all four walls of his box with donated canned food items (see picture). After seven days of donations and financial contributions, Zach presented 6,000 cans of food to a local shelter.

At the end of his cross-country walk, Zach quoted an ancient Chinese proverb: "A journey of a thousand miles begins with a single step." He followed this wisdom up with some of his own: "Most people don’t walk a thousand miles, or 2,500, but … we all need to take that first step to get something big done." I know that Zach has many more meaningful steps ahead of him, and would be honored to walk alongside him. Thanks for answering these questions Zach!

To make a positive difference in the lives of others.

I believe it has shaped me into a better person. I have grown up in a world of philanthropy and because of that, I have experienced a lot more than the average 16-year-old.

I get a feeling of fulfillment, in every way, that nothing else in life can offer.

I have several heroes in life. Oprah, whose story from her childhood is a large part of why I do what I do. President Clinton, Mother Teresa, and Bill Gates – for obvious reasons. Elton John would have to be my greatest hero. He had it all and realized he really had nothing without helping others. He uses his fame now for positive purposes and has helped more lives than anyone could ever count. I am not sure what I would ask him but I would love to be a tag-along on one of his trips to Africa and meet the kids that he helps everyday.

A million dollars would be a great start. However, I do believe that we don’t really need anything more than just random acts of kindness to solve many of the worlds problems. Imagine how awesome the world would be, if every day every person just did one kind act towards another.

After reading about me, what will you go and do to make a difference in the world?

I would entitle it “The Beginning of Me.”

I have a major crush on Maia Mitchell who stars in The Fosters. I would love to meet her.

Just get out and do it. If you think about it too much you will think of a million reasons why you can’t do it. Realize that you have incredible power as an individual … you really can change the world.

WHAT IS YOUR FAVORITE SONG AND WHO IS THE ARTIST?