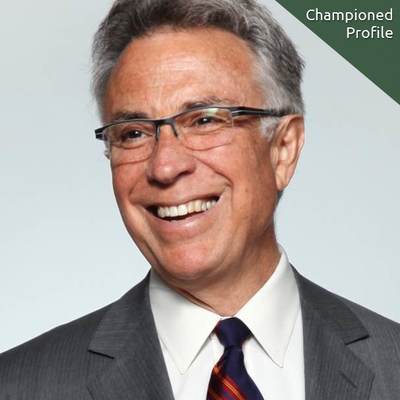 make the most of the gifts I have been given.

Like many of us, Bob Owen’s professional road was largely a question mark when he was young. “The minister of my childhood church tried to convince me to become a minister as well, and I gave it serious consideration.”

Bob eventually looked beyond the pulpit. He instead channeled his talents towards a career in law, becoming a nationally recognized commercial litigator with a knack for dispute resolution. He muses on his decision: “Having chosen the path I am on now, I have tried to pursue a ministry of sorts, nurturing decency in the world (when my own failings don’t get in the way).”

Humbleness aside, Bob’s success has as much to do with his prowess as a trial attorney and expertise in the field of e-discovery, as it does with his assets as a human being: a strong moral compass, desire to serve the public good, and an affable disposition. It’s with these qualities that Bob has climbed the legal ranks, achieving the position of Managing Partner for the New York office of Sutherland Asbill & Brennan LLP (Sutherland), an internationally renowned firm with more than 400 attorneys. This video of Bob and his team accepting the ALS Ice-Bucket Challenge is a prime example of the work culture he promotes.

Eight years ago, Bob’s skills as a litigator were put to the test in a heart-wrenching pro bono matter, with far-reaching consequences on the medical, political, and legal fronts. It was in 2006 that Bob was first introduced to Joe Bruce. Earlier that year, Joe’s wife, Amy Bruce, was tragically murdered by their son, Will, after Will was discharged from a psychiatric hospital in Maine without treatment for his diagnosis of paranoid schizophrenia. Their story was featured in a page one article in the Wall Street Journal and more recently it was the subject of an in-depth report on CNN looking at America’s “mental health crisis.”

In 2007, Bob (a partner with Fulbright & Jaworski L.L.P. at the time) prepared Joe Bruce to make a compelling case before the Maine Legislature. According to the WSJ story: “Despite advocates' objections, Joe Bruce – with the help of his pro-bono attorney, Robert Owen – successfully lobbied the Maine legislature to pass three bills. One gives mental-health professionals greater leeway to disclose patient information to those who may be affected by that person's conduct. Another makes it easier to medicate involuntarily committed patients.

More recently, Bob and Sutherland Partner Saren Goldner helped Joe establish the nonprofit coalition Treatment Before Tragedy, advocating for better treatment, services, science and a cure for individuals and families impacted by serious mental illness. Then, in May of 2013, Bob prepared Joe to speak before Congress, which resulted in Pennsylvania Congressman Tim Murphy proposing House Bill H.R.3717 – Helping Families in Mental Health Crisis Act of 2013. The bill is currently pending before Congress.

I asked Bob what he “gets from giving.” He said: “The rich sense that my skills, experience, and resourcefulness are helping others to make the most of their own gifts. The help I have given to Joe Bruce is a good example. His successes in achieving reform in Maine and in spurring really excellent efforts at reform at the federal level are his accomplishments, not mine. But I am sure that my assistance made it possible for him to succeed.”

Bob may not have become a minister, but it’s clear that he has made a profound difference from a different kind of pulpit.

This profile was championed (i.e., sponsored) by Infinite Spada, a global professional services communications consultancy. Working with Talking GOOD, Infinite Spada invited its extensive client base to submit names of changemakers for this one spot. After reviewing a host of deserving individuals, we selected Bob. Thanks to the team at Infinite Spada for investing in Public Recognition.

To make the most of the gifts I have been given; to raise moral children; and to provide my children (and their children) with the same opportunity for personal fulfillment and growth which I was afforded.

DESCRIBE A MOMENT THAT HELPED YOU GAIN CLARITY ABOUT YOUR PURPOSE

Not making partner at a prestigious Wall Street law firm – which I learned about late one Friday in October 1980 – restored and refreshed my focus on living a good life, containing blessings in all areas of life, not just professional. It wasn’t a thunderclap of clarity that occurred instantaneously; rather it grew over time, but looking back on it, the most painful day professionally was the most fortunate for me as a husband, father, friend, congregant, lawyer and man.

DESCRIBE A BELIEF THAT IS CORE TO YOUR BEING

I believe that Christianity is perhaps the greatest gift that humanity has ever received. No matter whether one believes in the miracles or the divinity of Christ, and leaving aside the bad things done in its name, the philosophical system of Christianity offers humans a solution to the shame and guilt and self-hatred we all feel.

Governor Scott Walker of Wisconsin. He has shown real political courage in order to bring about positive change against terrific odds and determined opposition. He could have taken the easier way and done what generations of his predecessors have done – pay off the rent seekers (government employee unions being the prime example) – but instead he took them on and brought about a restructuring of the situation that is actually working. We are fortunate to have Wisconsin lead the way towards reforms that can address deeply entrenched fiscal problems. I would ask him where he got the inner strength to take on the fight.

What doesn’t kill you makes you stronger. This is simply a blunt way of saying what we are hearing more and more these days: that no personal growth is possible without failure, because it is only through trying and failing that we learn the most valuable lessons.

WHAT ACTOR/ACTRESS WOULD PLAY YOU IN THE MOVIE ABOUT YOUR LIFE?

Any up-and-coming actor. Not a star.

WHAT IS SOMETHING MOST PEOPLE WOULDN’T KNOW ABOUT YOU?

The minister of my childhood church tried to convince me to become a minister, and I gave it serious consideration. I wanted to live my life out and about in the secular world of business, and politics, and all, but have maintained a deep interest in Christianity and the possibilities of the life I might have led but didn’t. Having chosen the path I am on now, I have tried to pursue a sort of ministry, in a very small way, nurturing decency in the world (when my own failings don’t get in the way).

The rich sense that my skills, experience, and resourcefulness are helping others to make the most of the gifts they have been given also. The help I have given to Joe Bruce is a good example. His successes in achieving reform in Maine and in spurring really excellent efforts at reform at the federal level (proposed HR 3717 being the prime example) are really his accomplishments,  not mine, but I am sure that my assistance made it possible for him to succeed.

QUESTION: What’s the most important personal attribute for a successful life? ANSWER: The sense that if you put your mind to it anything is attainable.