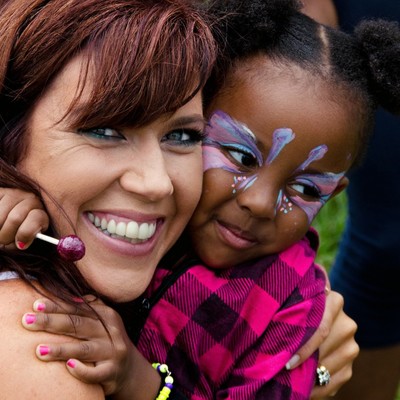 1) that of mother and spouse and 2) facilitator of memories for children battling illnesses.

Casey Baynes understands on a very personal level that no child wants to feel like they’re different. At a young age, teachers told Casey that her dyslexia would make academics more difficult. Despite the obvious challenges that come with a learning disorder, Casey had very high expectations for herself and worked hard to reach and then exceed them. She received her Associate’s degree before graduating high school and went on to become Towson University’s youngest Master’s Degree recipient at age 20.

For a time, Casey worked for a children’s non-profit, but then left to help run her family’s business. Not finding the work fulfilling, she eventually left that position to follow her heart. She initially met with social workers at hospitals and parents of children fighting cancer, sickle cell disease, cystic fibrosis and other life-threatening illnesses to find out how she could lessen their stress and make a difference in their lives.

Through these experiences, the seeds for the Casey Cares Foundation were planted. Since 2000, the organization Casey created has supported critically ill children and their families by providing uplifting programs with a personal touch. They may not be able to cure illnesses, but they help people manage these awful experiences in compassionate and creative ways. The Foundation offers to lend emotional, financial and moral support to parents and kids during these tough times. So despite the challenges of facing illness, Casey’s “C’mon, you can do it!” encourages kids and families to be brave, as it’s one of the main ways she’s learned to believe in herself in the past.

Although she doesn’t do it for the recognition, Casey is most certainly being recognized for the impact she has had in this area. In the last five years she received among other awards the “Ravens Community Quarterback Award”, “Bravo! Entrepreneur Award” from Smart Woman Magazine, and she was named by Kraft to be one of “100 Extraordinary Women” nationally.

Thank you Casey for all your creative and empowering positivity, and for taking the time to answer these questions.

Although my purpose continually evolves, at the present, I find my purpose twofold: 1. That of mother and spouse and 2. Facilitator of memories for children battling illnesses.

I get peace from giving.  My life is hectic these days but when I see the reaction of children in our programs when they experience “fun stuff” at this difficult time in their little lives, I feel peace.

It has opened my eyes to the tentativeness of life.  For example, we cruise along believing the weather, our mortgage, or car repairs are huge problems until we find ourselves or someone with a sick child.  I now know what heart wrenching angst that is.

My heroes aren’t those who win Pulitzer Prizes or receive accolades for remarkable feats.  My heroes come in small packages with wide eyes and the fortitude and courage that would rival the most accomplished athletes; young and tiny heroes who endure more in a single day than some of us do in a lifetime.  My question to each and every one of them remains the same: what can Casey Cares do to make you giggle?

I would love to be able to reach folks through various media to demonstrate how far a small contribution would go to take a family from the constraints of a hospital room to a sports event or beach getaway.

My question  is: “What would it take for you to empathize enough with these families to help them?”

Run – don’t walk to fulfill your passion!  There are so many wonderful causes.  We have got to realize that we are all in this together and we have to help each other.  Any small thing you do to enhance another’s life will enrich your life many times over – whether you start your own 501 (c)(3) charity or just give to someone who touches your heart.

QUESTION: What makes you a better person?  ANSWER: Not only do I believe I should try to help all seriously-ill children by providing them with a happier outlook, but I try to lead by example so my kids can start to get a sense of giving to others. I have a sense of pride when they ask me how they can help the families they’ve met through Casey Cares and they’ve even given some of their allowance to the charity at various times.