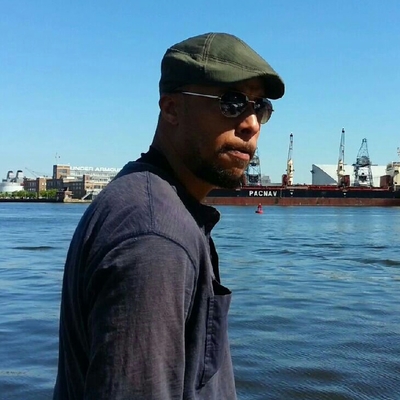 Not hold onto “it” but instead give as much of “it” away as possible.

Darius Wilmore is creative, outspoken, and prolific. Those are the adjectives that swirl in my head as I consider his long list of achievements, initiatives, and professions. Today, most people know Darius as the creative director, marketing strategist, and co-owner of Baltimore’s Taharka Brothers Gourmet Ice Cream Company. A recent article in Forbes refers to the company as an “employee-owned B-Corp—a benefit corporation, or for-profit company with a charitable mission.” Darius calls it a unique award-winning social enterprise amalgam … “SNCC + YO! MTV RAPS/106TH & PARK + ROCK THE VOTE + BEN & JERRY’S = TAHARKA BROTHERS.” I like Darius’s definition more.

Taharka Brothers broadcasts its messages of positive progressive social change, cultural understanding, and economic and social justice through its ice cream flavors, which are inspired by U.S. civil rights history, international human rights figures/movements, and socially conscious popular culture. For example, at this very moment they’re collaborating with Rain Pryor to craft a new flavor inspired by the comedy of her father, legendary comedian, Richard Pryor, whose comedy spoke to issues of class and race in America, turning the terribly unfunny into the hilariously comical! The working title of the flavor is “Pryor Knowledge … (of the ‘N’-Word).”

The company also recently launched a campaign on Kickstarter.com to raise funds for a branded ice cream truck, in order to “get activism onto wheels” and “bring the cold good stuff directly to the people.” As of this writing, $9,599 has been pledged and they have 20 more days to reach their goal of $28,000. Check out the video for more info …

On top of his Taharka Brothers responsibilities, Darius is co-creator of the Baltimore Mixtape Project, a rap and spoken word poetry slam competition (and album) that uses hip-hop music to reach youth about relevant political and public policy issues. Like most of Darius’s work, this project was influenced by his decade+ tour of duty in New York City as a creative and marketing strategist for the Russell Simmons empire (Def Jam, Def Comedy Jam, Def Pictures, et al). It’s evident that Darius’s love for music is all-encompassing. His favorite inspirational saying is: “I can’t live without my radio!” (as stated with armor-plated conviction by LL Cool J). “‘Cause ya’ can’t live without music–the beat. Gotta have it!”

Darius is involved in other mission-driven programs too, such as “THE BIG PAYBACK!” (Haiti) ™, which fosters business development opportunities (not charity) in direct collaboration with Haitian citizens. I could keep going, but I think his words below are way more interesting than mine. Thank you Darius for taking the time to answer our Talking GOOD questions. GOOD LUCK raising the money for the truck!

Don’t know if it’s changed me as much as the work has re-affirmed/confirmed some personal values I strive to hold onto, practice, express (imperfectly I might add).

Chuck D (leader of rap group Public Enemy). He’s my “musical hero” raising the consciousness of rap music and the then youth who listened to it to a whole new and politically aware level. We sat down late one night many years ago in a 24 hour diner and he told me all I needed/wanted to know over bottles of lemonade Snapple! I was living in NYC and working for the Enemy’s record label at the time, Def Jam recordings (late 90s).

What side are you on? And, yes, you do have to pick a side…at some point. So, again, what side did you say you were on? And, now that you’ve sided, what are you gonna do?

I’ve been, since I was about five, a pretty good  dancer! It’s one of my favorite things to do! Always has been. And it’s a joy to me to watch large groups of people get down! That’s why I loved being a DJ! It was a front row seat to watch people dance! Music moves people! Powerful!

Aspire to change the world for the better but with the understanding that you’ll likely fail. But, that’s okay because thinking that you alone can change the world is kind of a preposterous notion. You might just do it but it’s more likely that you’ll do a little something and those behind you will pick up the ball and kick it further, one by one, little by little. Have a sense of humor (about yourself).

Well, I have three.

QUESTION 1: What non-living person is a hero of yours whom you’d love to have dinner and a conversation with? ANSWER: Malcolm X and Bruce Lee together. Both seemed to walk and act authentically without any felonious fat on their bones. Some real brothers there!

QUESTION 2: What is your favorite movie? ANSWER: Spike Lee’s ‘Do The Right Thing‘. In my book, it’s the greatest movie ever made, man! If you’ve not seen it I highly recommend it. It’s got Ruby Dee (human rights activist, acclaimed thespian, poet, fly girl, dear friend to both Martin Luther King, Jr. and Malcolm X) in the flick and I’ve been crushing on her since I saw the film back in ’89! Still have a crush on her to this day!