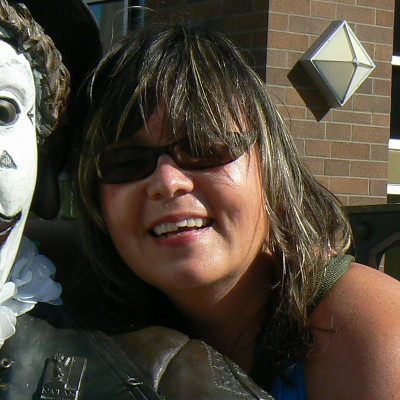 Help others by using ideas & art to inspire & encourage people to think out of the box & learn more about themselves & our environments.

Have you ever seen a news story about a natural disaster in a different part of the world and thought for just a millisecond “I should go help”? Many of us have experienced this fleeting, selfless fantasy, but it’s almost immediately squashed by the realization that we have work and family responsibilities, not to mention financial constraints. In short, life gets in the way. So instead we send money, or perhaps we do nothing.

In a small suburb of Vancouver, British Columbia, artist, educator, and part-time civil servant Diane Moran is acting upon these altruistic impulses. Just days after Hurricane Sandy hit the East Coast, Diane was in contact with teachers at Brooklyn’s PS-15 Patrick Daly Elementary School, based in one of the harder hit areas of the city. In the weeks that followed, Diane single-handedly orchestrated Books for Brooklyn, a community-based campaign designed to replace books and other educational items damaged by Sandy, as well as connect local students in Port Coquitlam, BC with Brooklyn students through a pen pal program.

In April, Diane will celebrate her 49th birthday by traveling to Brooklyn (on her own dime) to visit with the kids at PS-15, to hand deliver 25 painted banners from their new friends in Canada, and to orchestrate a free public screening of Dirt The Movie in honor of Earth Day (Diane arranged this too!!).

Unsurprisingly, this is not the first time the Vancouver-born artist has reached out across time zones with her heart. In the aftermath of Hurricane Katrina, Diane established a campaign in which t-shirts emblazoned with “Canada Cares” were sold and the proceeds sent to aid victims. This modest campaign of caring evolved into the “BC to Bernard Book Project” where blues musicians from around the province met at the celebrated Yale Hotel in Vancouver, raising $4,000 to aid in the rebuilding of the Unified School in St. Bernard Parish, one of the most heavily affected parishes of New Orleans.

For her day job, Diane works with kids at the Cameron Recreation Center for the City of Burnaby, BC Canada. According to Sue McIntyre, Diane’s supervisor at the rec center, “Diane is a very creative, generous person and she’s always looking for opportunities to make more out of life – both for her and the people around her. She makes life more delicious … full of meaning and goodness.”

It’s clear that Diane uses her art to inspire, heal, and foster creativity. Not only that, but she encourages open dialogue and communication between individuals living in very different parts of the world. To me, Diane is the embodiment of the term “citizen philanthropist.”  Thanks for the example that you set, and for taking the time to answer these questions!

My purpose in life is to heal and help others by using ideas and art to inspire and encourage people of all ages to think out of the box and learn more about themselves and our environments.

FOR YOU, IS DOING “GOOD” PRIMARILY A SELFLESS OR SELFISH BEHAVIOR?

For me doing Good is selfless, and I feel the act of doing Good can actually help those who have become selfish. I try to live each day in gratitude and share my positive behavior by helping and connecting with others that do the same.

WHO IS YOUR HERO AND WHAT WOULD YOU ASK THEM IF GIVEN THE CHANCE?

My male hero is David Suzuki. He has been a driving force in our society as a planet protector and champion of change. My question to him: Do you ever get discouraged with the many environmental issues like global warming and other obstacles that are among us today and how do you deal with that?

My female hero is Jane Goodall. My question to her: How did you start Roots and Shoots and what is your next project?

Title of my book: Why Push the Pull Door. The book would be part biography, and part inspired images sharing my triumphs and challenges dealing with dyslexia. And how I managed to find answers to the many questions of Why I Push the Pull Door? Sometime it’s not about how you read something but how it is interpreted.

I would choose someone, innovative, quirky, out-going with a big heart, and a sense of artistic style. I have no idea who that would be?

The belief that is core to my being, that all people are intrinsically good and that anger, negativity and savage behavior comes from illness or one’s environment. I also believe that forgiveness if practiced can change the world and that living a life in gratitude is the attitude to succeed and grow as a person.

I would be traveling the globe as a photojournalist for National Geographic capturing the essence ideas and inspiring images of life that have not been shared yet.

Most would be surprised to know that I was once a member of a local ghost hunting group. One of my most memorable Birthdays was spent in Savannah Georgia where I had the pleasure of having an after-hours tour of the Bonaventure Cemetery. The moon was full, a foggy mist encapsulated the grounds and the jasmine wafted through the air every sense I have was fully engaged.

IF YOU COULD HAVE ONE WISH GRANTED THAT WAS TRULY POSSIBLE, WHAT WOULD IT BE?

My one wish is to have the opportunity to personally meet with Oprah Winfrey to thank her for the work the she had done and share with her some ideas and insights for O Magazine. There is a seed (an idea) that was planted many years ago that I know is ready to grow with the right amount of water and light. Meeting Oprah would allow that seed to be planted. It then would be up to each of us to nurture it and watch it grow.

WHAT QUESTION(s) DO YOU WISH I HAD ASKED, AND WHAT IS THE ANSWER?

I wish you had asked me what both inspires and disheartens me about the use of media, movies and story-telling on TV and the big screen. ANSWER: I am inspired by people who have made a difference for others by using film and their determination to find ways to change difficult situations. I am disheartened and disgusted by the use of media, film, and TV that promotes the negative and unsupportive side of society that continually undermines our intelligence. Example the un-real images and stories of Reality TV.