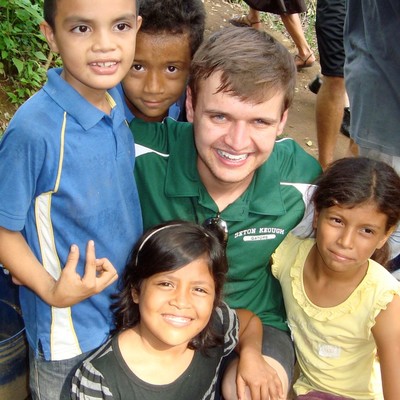 Serve God and love other people

Every week, Talking GOOD features individuals whose dedication to purpose is woven in to the fabric of their beings. However, I find it particularly inspiring when that individual was born after 1982 (i.e, is still in his/her 20s). It’s so  refreshing to meet young men and women who, unlike me at that age, are thinking less about themselves and more about their contribution to a calling. This week’s spotlight,  Dylan Waugh, is one such example.

Dylan is the founder and president of VISEDAL Partnership, which offers mentoring and education programs that empower destitute kids in Nicaragua to become leaders in their communities. He first traveled to Nicaragua during his junior year at The College of William and Mary, and returned there after graduation in 2007, which is when he formed the organization. Since coming back to the States, Dylan obtained his M.J. degree from University of Maryland, College Park in 2009 and now earns a living as a writer/editor at a consulting firm in Columbia, MD. He runs VISEDAL in his spare time, with lots of help from family and friends. Not that anyone is keeping track, but he’s ONLY 27.

Thanks for playing “Talking GOOD” Dylan. Much continued success!!

My purpose in life is to serve God and love other people.

Overall, I hope that I can live out my answer to the first question. Specifically, for me, this involves loving my wife, Emily; my family; my friends; my coworkers; our VISEDAL children in Nicaragua; and anyone else I encounter. Also, for quite some time now I’ve wanted to run a marathon and write a book. Oh, and watch the Orioles win a World Series.

I would love to spend the day with Tim Tebow. There’s not one specific question I would ask him; instead, I would like to just follow him around and observe how he treats people. Maybe I could pick up some tips. I am so impressed by how selflessly he lives.

I would go with Something Bigger. My book would focus on the concept that we are all designed, and therefore seek, to be part of something bigger than ourselves. I believe that it’s only when we’re living for more than just our own desires that we find real happiness. This idea has played a huge role in my life. So often I am content to live for myself, but my experiences in Nicaragua represent examples of times when I dared to step out and try to live for others. It’s in those experiences that I’ve really felt that I’m living a full life. I’ve actually started writing down some thoughts, but to call what I have so far the beginning of a book would be an extreme exaggeration. One day, I suppose.

This is a tricky question because I don’t watch too many movies or TV shows, so I’m not familiar with too many actors. In college people told me I look like the San Diego Chargers’ kicker, Nate Kaeding, so he’d be my choice. I’m not sure if he’d be a good actor, though

The idea that God loves us—you, me, everyone in the world—is very important to me.

My biggest heroes will always be my parents. They have taught me, and modeled the importance of selfless, unconditional love. I also really respect people who truly grasp the concept of living for a cause outside of themselves. A prime example is Tim Tebow. What a role model.

I would be teaching high school history and coaching baseball. I was taking education classes when I first went to Nicaragua. I fell in love with the country and decided to live there for a while after I graduated. Early on in my stay, three kids walked up to me on the street and asked for a dollar, and I took them to lunch. They became the first VISEDAL children. When I ran out of money and returned to the States I went to journalism school, and now I’m a writer/editor at a consulting firm and run VISEDAL in my spare time. But before going to Nicaragua, I was sure that I was going to be a high school history teacher and baseball coach. I had wanted to do that since early in high school.

I have a tattoo. Many people are surprised by this—I guess because I am pretty shy and reserved. My dad and I got matching blue crosses in the spring of 2007, mine on my chest and his on his leg. I had decided that I wanted a tattoo, and I talked with my parents about it, fully expecting them to disapprove. To my surprise, my dad said that he wanted to get one, too. So off to the tattoo parlor we went.

I wish you had asked me about my family’s involvement with VISEDAL, because I love talking about that topic. My parents and Emily’s parents are beyond supportive of our work. Our extended families have also been instrumental in VISEDAL’s efforts. Many of our family members sponsor children and have been on our volunteer trips. The fact that Emily and I can share our passion with our families is something that I treasure deeply.