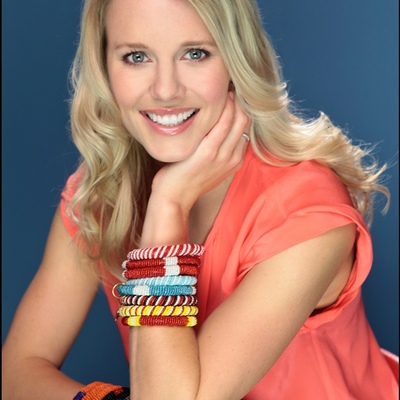 The second I read Kristen Kenney’s bio, I wanted to feature her on Talking GOOD. Kristen is a prime example of someone who’s purpose in life was forged directly from a profound, life-changing (and life-threatening) experience. In 2009, Kristen along with an Emmy award-winning Travel Channel film crew, found themselves in Tanzania, Africa working on a documentary. While there, she contracted an aggressive form of malaria.

It cost Kristen less than ten dollars to buy the life-saving medicine that she needed; a seemingly miniscule price to pay to safe a life. Yet, for people in Africa’s poorest communities, that medicine is hard to find and even then, too expensive to purchase. In Africa, 800,000 children die each year from Malaria. Kristen’s near death experience became the catalyst for a grassroots initiative called  MALAIKAFORLIFE.ORG – Buy a Bracelet, Save a LIFE.

Today, Kristen is a field reporter & feature producer for FOX Sports. Later this month, she will represent her company at the 2012 London Olympics. She continues to volunteer and dedicate her time to MALAIKA FOR LIFE and the malaria cause. Thanks so much for answering my questions Kristen!

To be a voice in the fight to end malaria and mobilize a network of people to Go-MAD –”make a difference.”

I hope to see the world malaria-free and to continue to create a movement that motives people to take action. One day your life will flash before your eyes, make sure it’s worth watching.

Nelson Mandela – from a man who has gone through adversity, how do you forgive, what inspired you to keep fighting, how do you turn a horrible situation into something good and what world issues keep you up at night?

I would say Katherine McPhee because she is the girl next door / ambassador for malaria no more, but I really don’t know many actresses or actors to be honest.

My family because that’s where my kindness, courage and drive comes from, and I wouldn’t be where I am today without their support and Nelson Mandela because he is an achiever despite living a life of many struggles. He stood for what he believed in and dedicated his life to fighting for it. I admire his kindness and forgiveness. Don’t mistake kindness for weakness…

A sports reporter by trade, my near death experience with malaria was the greatest thing that ever happened to me, opening my eyes to a bigger purpose in life. I hope to use my media platform to raise awareness and do good. Watch the full story here: http://youtu.be/-cLHPZhMoz4 (video also embedded above).

What does “Malaika” mean, and why should we care about malaria in America?

Malaika means angel in Africa. Malaria is an important global concern. It not only kills a child every 60 seconds but keeps a country in continual poverty. WE are ONE COMMUNITY at the end of the day. Malaria used to exist here in our backyard about 60 years ago. We are so fortunate to live in a place where mosquitoes are not deadly and a place where our dreams can flourish. Why not give a little, especially if it can go so far and save a life. Be an angel, buy a bracelet, save a life at http://malaikaforlife.org