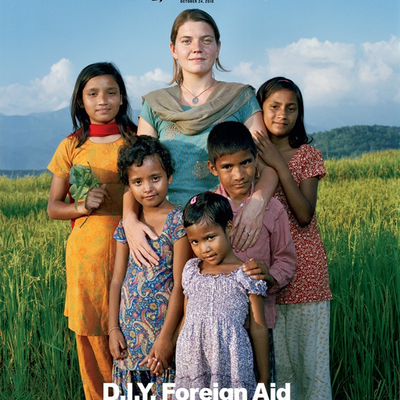 Give my children a happy childhood, keep them healthy, and change the model for orphan care.

One morning at the age of 18, fresh out of high school, Maggie Doyne awoke with the feeling that she was not yet ready to move into her freshman dorm. Instead, she wanted to defer college for a year to travel and discover her “inner-self.” It was a decision that would change her life in ways she could never imagine.

Four countries in and thousands of miles later, Maggie found herself in the midst of a remote, war-torn village in Nepal. She watched in despair as the Nepalese children would break down rocks into gravel and then sell them for one dollar a day just to buy food. Maggie was compelled to take action. One young girl in particular had touched her heart, so Maggie paid seven dollars to enroll her in school. That was the beginning.

One child quickly became two and then two turned into five. Soon, simply enrolling the children didn’t feel like enough. With a lack of resources but a huge sense of hope, Maggie was determined to provide these young refugees with stability, and a real foundation for life. At age 19, she convinced her parents to wire her entire savings of $5,000, in order to buy a piece of land in Nepal. With the help of the local community, Maggie spearheaded the creation of the Kopila Valley Children’s Home for Orphans. At age 23, Maggie also opened a school, which today (three years later) serves more than 300 students from Surkhet and surrounding regions.

Maggie was only 19 years old (and 8,000 miles away from home) when she launched this project, but she never let her age impede her from reaching goals. In fact, Maggie believes that it’s essential to maintain a youthful, idealistic, and optimistic attitude in order to accomplish something seemingly impossible. In a presentation three years ago for Do It Lectures (see below), Maggie pointed out that people have the tendency to become doubtful as they age, and focus on things they don’t have. People might say, ‘I could do this if I had more money or if I had my Master’s Degree.’” Maggie assures her audience that you don’t need to be comforted by those things, “You already have everything you need.”

After reading Maggie’s interview below, you can learn more about her work in Nepal and with The BlinkNow Foundation, which she created as a vehicle to share her mission with the world. We’re honored to be featuring you on Talking GOOD Maggie!

To give my children a happy childhood, keep them healthy, and change the model for orphan care.

This work has made me hopeful that change is possible and 100% achievable in my lifetime.  I see this every day in front of my eyes.  I am convinced that we can end world poverty for good and we can do that by educating and caring for our world’s children.

I get a bursting heart and 300 of the happiest most amazing little kiddos in the universe; hugs every day,  lots of laughs, family games of capture the flag,  too many Birthday parties to count, and more love than I could have ever imagined.

I love Melinda Gates and everything she is doing to change the world for women.  If we ever meet, I’ll ask her to come visit us in Nepal!

We recently just  filled six Kopila Fellows work positions.  The Kopila Fellows program is designed to bring remarkable people from around the world to be part of our community in Surkhet, Nepal. We seek positive, fun, extraordinary thinkers and doers who will help inspire and nurture the children, staff, and faculty of our ever-growing home and school. You can apply at www.blinknow.org/kopila-fellows/. We also have a wish list with items we need for our home, school and clinic:  http://blinknow.org/wishlist/.

I would ask a community of philanthropists; “It seems like we all have common dreams and goals to make the world better for our children. What are some ways that all of us with common interests can work together, partner, and collaborate?”

If I ever wrote a book I would write up a bunch of stories about the kids and everyday life here at Kopila for them to read and remember when they are older.  As for the title… I’ll have to think on that.

The children and I have a constant battle with head lice.

Follow your heart.  Do what you love.  For any problem, education is usually the answer.

QUESTION: How do you find time to be a mother to 40 children?

ANSWER: I have A LOT of help.  I couldn’t do any of this alone.  I have an amazing team to help me day in and day out.  The kids call our cooks and caretakers their “aunties” and “uncles.”  I have local teachers and a principal who helps me run our school, two amazing boards from both the U.S. and Nepal, and volunteers who came from all over the world to help us.  In terms of finding time for each kid, most days I find that there really aren’t enough hours in the day.  At night before bed we do something called “satsung” where we sit together in a circle and have a family meeting, sing songs, and talk about our day.  It’s really helpful to have a designated time where we are all together in one space as a family.  I look forward to it each and every night and I know the kids do too.